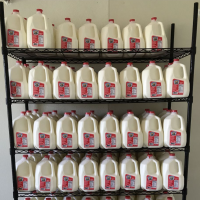 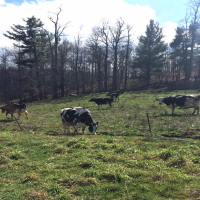 Cheek Farmstead Creamery
Address: A M Cheek Rd Fleetwood, NC, 28626
Email Address: candcdairy@gmail.com
Phone: 336-977-0656
Website: https://www.facebook.com/Cheekfarmsteadcreamery/
About Us
We are a small, family owned and operated, local dairy farm in Ashe County. We are working to provide people with local, high quality milk. Unlike our competitors who use high temperature pasteurization, we pasteurize our milk at a low temperature which does not kill the good qualities found in the milk. Our product is not homogenized which means the cream does separate to the top of the milk so it must be shaken well before use. Non-homogenized milk makes the cream easier to digest and has been scientifically proven to be healthier. We encourage you to research for yourself. We also, encourage you to taste the difference in our local, farm fresh product.

We have remained in the dairy business and has been in production since the ’70s, milking twice a day, 7 days a week, 365 days a year, from our select herd of Holstein/Jersey hybrid cows, hand-selected and cross-bred for this climate and the quality of their milk.

Rodney Cheek and his sons, Trathen and Brandon are the brains and brawn of the family farm today. It lies on over 200 acres of rich, picturesque land that borders the crest of the Blue Ridge Mountains near the Parkway between Philips Gap and Deep Gap. Rodney’s grandparents, Marsh and Kiter Cheek, began farming there in 1911. Their sons, A.M. and Charles Cheek took it over in 1950, and Rodney has had the reins since 1997. His parents, A.M. and Louise Cheek have poured their hearts and lives into their family and the farm and continue parenting and now enjoy being great-grandparents.
Until recently, all the milk was sold in bulk to bottlers outside the area. In the summer of 2016, the Cheek Farmstead Creamery began its private label bottling operation, offering gallons of fresh, whole milk direct to the community. Cheek’s milk is completely unlike the milk normally found in dairy coolers at the chain stores.

The evidence of that is in the tasting. You just have to taste one glass of Cheek’s milk to understand. It is different, and it is better. Why? One reason is that the abundant fresh water springs at 3,600 feet near the Eastern Continental Divide allow Cheek’s cows to enjoy some of the highest quality drinking water Mother Nature has to offer. That is a good start. Combined with plenty of rich, well managed pastureland, it’s no wonder the milk from Cheek’s cows rises above all others on the dairy case quality scale.
Practices
We implement a diverse and complete diet for our dairy cows, raising crops like alfalfa, corn, mixed grass and hay as well as the recent addition of a species of grass called Matua Bromegrass, which combines many good traits of pasture grass and hay production for diversity of diet for the cows and enhances the food value — not to mention — and most of all, the flavor of the milk.

Cheek’s Dairy has always operated on the concept that bigger and quicker is not always better, and quality and integrity are really what count. The Cheek’s family traditions are deeply rooted, but they also recognize the importance of adaptive, modern living, and that includes adhering to government regulations designed to protect our safety and health. That is why milk sold to the consumer must be pasteurized — it is a federal requirement.
Most folks don’t know it, but there are 2 federally-approved methods for pasteurization. One is the popular, faster and cheaper modern-day method known as “flash pasteurization,” which heats the milk to 161 degrees Fahrenheit for 15 seconds. The other method (used by the Cheeks) is “vat pasteurization,” which heats the milk to 145 degrees Fahrenheit for 30 minutes. Although both processes certify the milk to be safe and marketable, the milk resulting from each process is different.

Why? Both processes kill naturally-occurring microbes in the milk. Certain microbes are desirable in dairy products, giving rise to the friendly bacteria found in yogurts and similar foods. The vat method (less hot, longer duration) preserves more of the beneficial microbes that humans need in their diet. The milk fat (or cream) is also less degraded by the vat process compared to the flash process.

Another reason Cheek’s milk is different is that it is not homogenized, so the cream rises to the top, requiring it to be shaken prior to pouring to equally redistribute the milk fat, which is where much of the flavor comes from. Conventional homogenization breaks the milk fat molecules into smaller-sized units, which also affects the flavor, texture and digestibility. That makes Cheek’s milk so much better tasting than all the other milk you’ll ever taste. Just remember to shake well. It is rich, full and fresh.